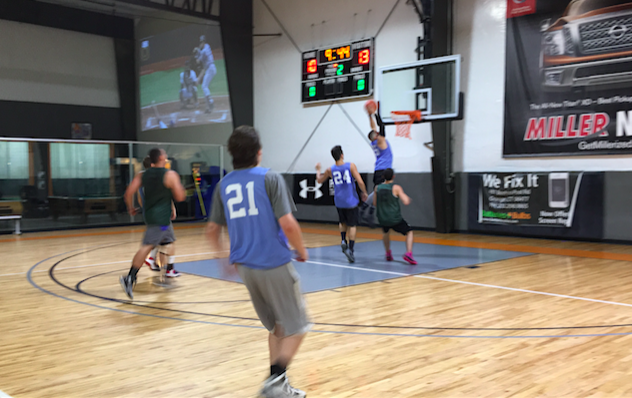 Blood, Sweat and Beers kicked off their Fall ’16 campaign with a hard fought win over the Kekambas, 57-52.

Blood, Sweat and Beers’ attack was calculated and structured right from the jump, as they spread the ball around efficiently and slowed the game down, finding themselves up ten points at halftime.

Andrew Sampietro was a key piece to BS&B’s success tonight, leading the blue and white with 11 points, while adding four assists and four steals.

“When the next squad switches in we know they can take care of business too, so we’ve got to play good defense, box out and share the ball around for us to be successful this season,” Sampietro said.

As a team, BS&B had five players score more than seven points, and held The Kekambas to 34 percent shooting from the field.

The Kekambas weren’t about to be counted out that soon though. Behind Aaron McAlpine’s 21 points, and Nick Scozzari’s 14 points, the Green and Black powered to within three in the final minute of the final quarter, but could not push past BS&B’s balanced attack and late game free throws to earn a win.

Blood, Sweat and Beers will look for a second win next Tuesday when they find themselves matched up against another new squad this season in the Air Ballers. The Kekambas face off with the Goon Squad in Week 2, who picked up their first win on opening night over Run TMC.