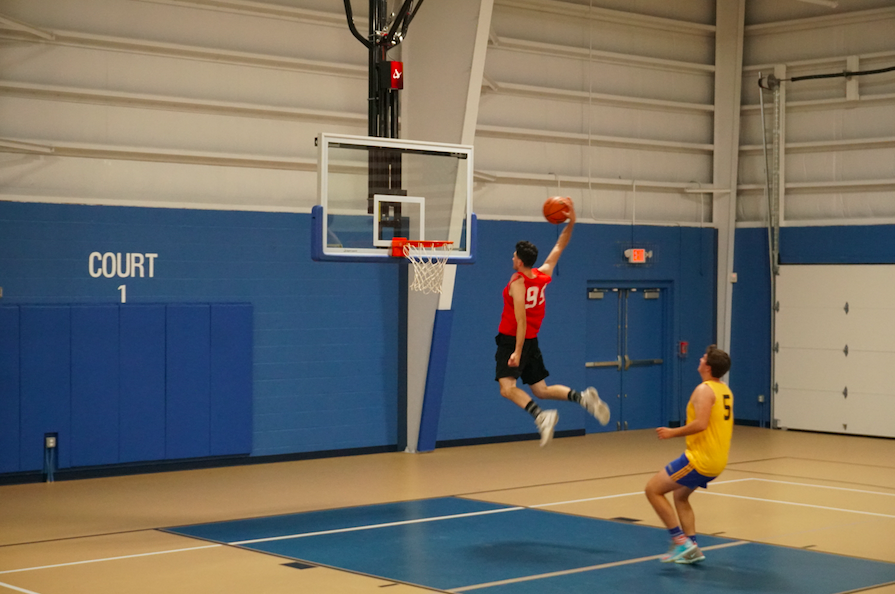 It was a low scoring affair Thursday night, but the Wild Hogs prevailed to secure their first win after beating the also winless Shake N’ Bake in overtime, 49-46.

The Wild Hogs burst out to a 12-point lead entering the half but squandered it, allowing Shake N’ Bake to force overtime. Joey Coro packed the box score with 19 points, eight boards, five blocks, and three steals.

Coro provided some insight into what made the difference down the stretch to help his team snag the win.

“Slowing down the pace (was key) because our team likes to get a little crazy,” Coro said. “It was just getting our shots that we needed to hit. We like to dribble around the court and bomb threes, but once we settle in and get the points we need to score, we should be able to beat any team.”

The Wild Hogs were missing Mike Bandieri, but were led instead by Sonny Guelce’s 24 points, who now has had two great games in the last three days. Just because a game is low scoring doesn’t mean there wasn’t drama. There was a lot on the line as the Wild Hogs and Shake N’ Bake knew they each had a chance at their first win of the season.

Dan Kennedy gave it his all while dropping 23 points and 13 rebounds. Collin Russell and Patrick McCarthy accounted for 12 and seven points respectively, which rounds out most of the teams scoring.

Shake N’ Bake just can’t seem to get things rolling as their other four players scored a total of four points. Chris Reali and John McCarthy each grabbed seven rebounds at least, but Shake N’ Bake is going to need more than that if they want to get that elusive first win.

Shake N’ Bake will hope that happens next week against the Bucket Chasers, while the Wild Hogs will try and make it two-in-a-row against the Werewolves.

Coro had a message for the rest of the league now that they’ve got that first win.

“All I gotta say is, don’t be under the rim when I’m coming,” Coro said.