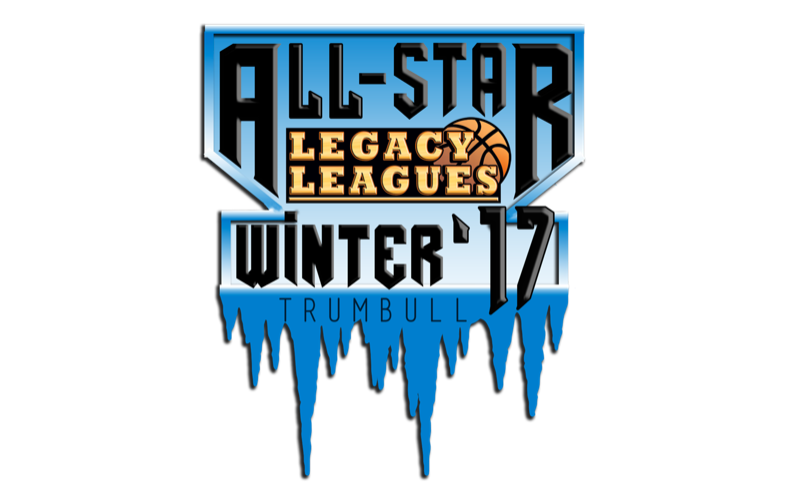 Despite only two teams remaining in the Winter 17 playoffs, the playoff intensity will take a day off on Monday, April 17 for the Legacy Leagues All-Stars, high flyers, and three-point marksmen to show off their talents. You won’t even have to be at Insports in Trumbull to watch the action, as both the Dunk Contest and Three-Point Contest will be live streamed on the Legacy Leagues Facebook page.

All the All-Star events will be much improved from last season, thanks to DJ Stillo, who will be in attendance pumping up the crowd and adding sound effects to all of the events.

The first All-Star event will be a showcase of the league’s top sharpshooters. Participants will take 25 total shots from five ball racks placed around the arc; in the corners, on the wings, and one at the top of the key. The first four balls on each rack count for one point apiece, while the last ball on each rack, or the “Money Ball” will count for two points each, allowing for a maximum of 30 points.

The event will be timed, but the time-factor will be used as a tie-breaksr in the first round only, as each contestant shall have more than enough time in the two allotted minutes to take all 25 shots.

The contest will consist of two rounds with the six contestants. Half of the participants will be eliminated after the first round, and the final round will contain the top three shooters from round one to determine the winner.

While all of these shooters are very skilled from long-range I tend to lean towards experience and it is going to be tough for me to go against the defending champ, John Rullan of No Limit. However, if I had to pick someone other than Rullan I’d say Bryan Pratt of the Temptations has the next best stroke from beyond the arc.

Up next on All-Star Monday Night showcases the league’s best and most creative high-flyers. The competitions will feature three rounds, but the final round will only feature the three participants with the highest combined scores from rounds one and two. This event will also be streamed live on the Legacy Leagues’ Facebook page.

The dunker’s scores will be determined by five judges, each scoring the dunks on a scale of 1-10. There is no time limit on this event, but each participant will be held to a five dunk limit per round. In the Final Round, each participant is allowed one final dunk to determine the champion.

The sixth participants of the Winter 17 version of the Slam Dunk Contest are defending champion Howie Miller of No Limit, his teammate Kevin Rivera of No Limit, Reggie Stewart of the Monstars, Markey DesRuisseaux of The Firm, Brandon Massaro of Goon Squad, and the fan vote winner Steven Echols of Stranger Danger.

Normally, I would side with experience once again, but I have been on the Markey DesRuisseaux train all year because of his aerial acrobatics. I believe Howie Miller will meet him in the finals, but we could have a new Slam Dunk champ Monday night.

Now, after the sharpshooters and high-flyers show off, All-Star Monday Night will conclude with the Winter 17 Legacy Leagues All-Star Game. Captains Jalen Graham of Red-emption and Tarell Vargas of No Limit already drafted the two teams, both of which are filled with star power. The teams are featured below:

Despite all the talent and star-power on the court at once in this game, one team must emerge victorious. Team Vargas has more continuity and chemistry; featuring three players from the same team (Vargas, Miller, and Rullan of No Limit), and has greater floor spacing with the two best shooters in the league in Rullan and Davis. Therefore, I believe in a closely contested game, Team Vargas will come out on top.