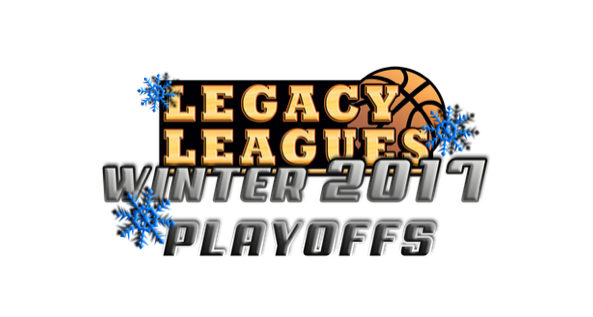 It’s down to the final four teams in the Legacy League playoffs, and it’s safe to say each time earned the right to be here. On one side of the bracket, we have seventh-seeded Run TMC (the lowest seed left) taking on three-seeded Red-emption; while on the other side the top-seeded Cereal Killers take on the fifth-seeded Monstars.

Last night, Run TMC took on the undefeated-powerhouse No Limit, and were able to come away with the upset. Run TMC plays a very balanced game, and are extremely unselfish on the offensive end. It doesn’t matter who scores or who doesn’t; the only thing these guys care about is winning. Period.

The key to their success revolves around Will Hudson, Kevin Blake, and Matt Zocco. Hudson and Blake get up and down the floor well, and do a tremendous job guarding the paint, while Zocco gives them the ability to stretch the floor as an outside shooting threat.

It’s not going to be easy, though, for Run TMC because the team that stands in their way is a force to be reckoned with. Red-emption, the second-highest seed left is led by league MVP Jalen Graham. Red-emption has been on a roll, winning their first two playoff games handily.

The biggest concern for them is the health of Scott Corchard as they play this back-to-back, who’s recently had to bounce back from an ankle injury. He is the floor general for them out on the court, and they’re going to need to him to help lead the team tonight, as they try to advance to the championship game.

On the other side of the bracket, we have the Cereal Killers and the Monstars. Both teams have extremely talented rosters, with guys capable of shooting the deep ball and dominating the low post. The biggest factor in this game is the mental strength of the Monstars. With players like Reggie Stewart, Corey Jacobs, and Ty Alston, the sky is the limit, but the team has a history of losing their composure in crucial moments of the game. If they can block out all the noise and ignore any missed calls from officials, they can certainly give the Cereal Killers a run for their money.

That being said, the undefeated Cereal Killers won’t go down easily by any means. It seems as though every time this team is tested, they respond. Led by standout player and former MVP Mike Davis, they seem to turn it on whenever they need to.

In this round it is going to be more important than ever that the Cereal Killers have a strong start to avoid any chance of having to battle back from behind. That means Davis is going to need extra support from guys like Justin Thompson, Nick Perry, and Ty Coward.

One key matchup to look for is likely going to be the Monstars’ Jacobs guarding Davis. Jacobs is one of the best on-ball defenders in the league, while Davis is one of the top scorers and most lethal shooters.

I expect both of these games to go down to the wire. At this point, it is very literally anyone’s game, and these four teams have certainly proved that they deserve to be here. We now know one of these four will be crowned champion of the Winter 2017 season when the Finals are played on Tuesday, April 18 at 9:15pm, but first they all have to survive and advance past a tough opponent in the semifinals.