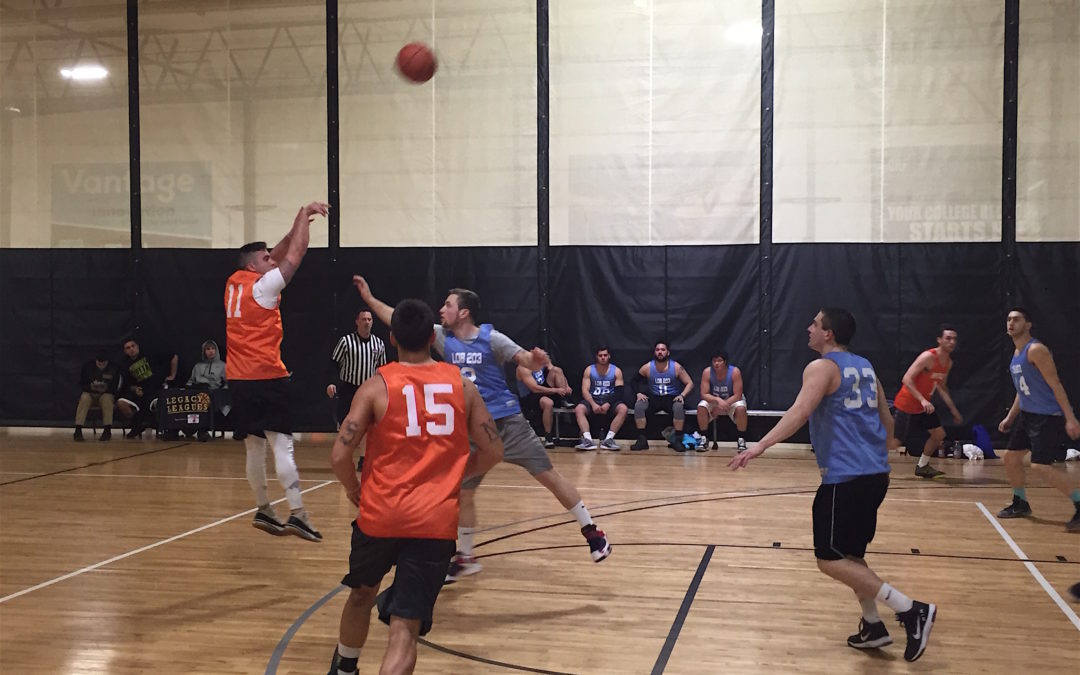 This week’s previews are presented by: East Coast Garage Door

Weekly Rebound Podcast S2E10: Week 9 review and playoff scenarios with Joey Zocco: Sam Leventhal is back this week, and has taken the responsibility of hosting the Commish Joey Zocco. The guys go in-depth recapping Week 9 (2:40) and what those games mean for the playoffs. They also make some Week 10 Monday (35:55) and Week 10 Tuesday picks (40:00), talk potential playoff seeding for some teams (44:37), make upset picks (49:00) and Sam has some interesting questions about 5th Man of the Year and Red-emption being legit (51:45).

Sportslook is coming into this week after a sloppy loss to Lob 203 last week. Stranger Danger hopes to bounce back after a tough loss to Cereal Killers. This should be a close game and Stranger Danger is looking for a last minute victory to raise their playoff seed. If Tyrell Holmes doesn’t show up for Sportlook, Johnny O’Brien and Will McAdoo should have no problem helping lead Stranger Danger to the win.

Both teams come into this week after close victories in week nine. The Renegades slid past White Magic, while the Temptations beat Run TMC in the last few seconds. The Renegades and Temptations each have a goal of a higher playoff seed, and this game will be a deciding factor. Ty Reed and the Renegades will have to work on defense and moving the ball around if they want to beat Carmine Santorelli’s sharpshooting and Temptations good inside play.

In a game with heavy playoff implications, Goon Squad finds themselves on a little bit of a losing streak, most recently a tough loss to No Limit. Red-emption is coming back to the court after a hard-earned victory against the Monstars. Matt Marconi and DJ Ellis will have to be effective shooting and put constant pressure on Jalen Graham if they want a higher playoff seed.

Run TMC lost in the last few seconds against the Temptations last week, while Lob 203 scraped by Sportslook for their second win. Run TMC will be looking to hit the ground running this week with a lot of fast paced basketball against the lackadaisical Lob 203. Andrew Martino will need help from his team if he hopes to overcome the Zocco duo, WIll Hudson, and Kevin Blake.

No Limit will hope to continue their undefeated streak as they go against the Temptations this week. Carmine Santorelli will have to play a great game and utilize his teammates to even be in the conversation of beating No Limit. Howie Miller, John Rullan, and Tarell Vargas will have to play hard team defense against Santorelli to contain the potential MVP candidate.

Both teams come into this game after close victories in week nine. The Renegades scraped past White Magic, while Lob 203 won a sloppy game against Sportslook. Lob 203 will be hoping to gain one last victory to raise their playoff seed. Both teams will need to control the tempo and maintain possession of the ball if they want to win.

Run TMC will be looking to sweep both games this week in order to get a higher playoff seed. If Sportslook doesn’t come away victorious, they will end up entering the playoffs as a bottom-two seed. Once again, Sportslook’s fate relies on Tyrell Holmes and Scott Benzing, while Run TMC has a good squad that passes the ball well and plays an uptempo style, one that Sportslook will have to try to keep up with to keep the score close.

The Cereal Killers will attempt to continue their undefeated season this week after dominating Stranger Danger in week 9. This is Goon Squad’s last opportunity to make a statement before the playoffs. It is up to Goon Squad’s defense to win this game, as we have seen the Cereal Killers be a high-scoring team who only gain momentum as the game continues on.