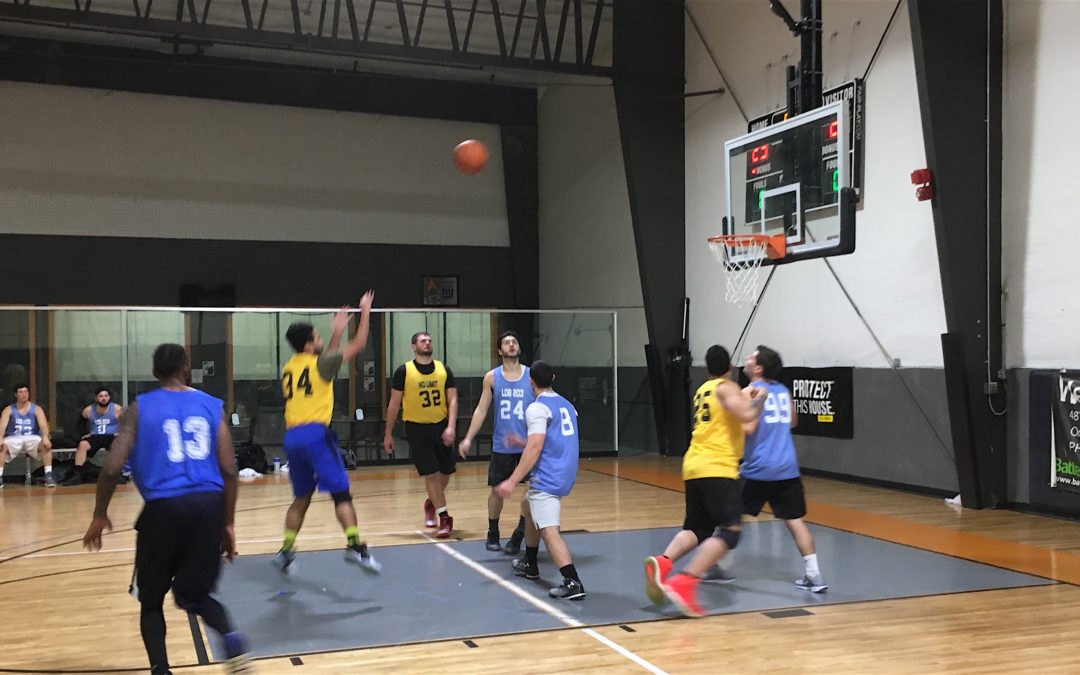 Joe and Sam are back for another week of analysis, power rankings and game picks. Follow @WeeklyRebound on Twitter to interact with the guys and ask them questions to potential be a part of next week’s show.

In a battle of unbeatens, and possibly the two best teams in the league, both the Monstars and No Limit are coming off hard-fought victories in Week 4. The Monstars pulled away late to defeat Run TMC, while No Limit won a nail-biter over Lob 203. No Limit will have to increase their defensive intensity and focus to keep the high scoring Monstars, led by Reggie Stewart, from lighting up the scoreboard. Look for No Limit’s Howie Miller to match-up with Stewart to negate his high-flying play with length and athleticism.

Both teams come into this game off demoralizing defeats in Week 4, with Red-emption blowing a second half lead to the Temptations, and the Avengers getting crushed by the Renegades. The Red-emption and MVP candidate Jalen Graham have more at stake in this game, competing for a better playoff spot, and will look clamp down defensively after giving up 101 points the previous week. The Avengers, led by Zach Shapiro will need to chuck and duck from beyond the arc to keep this game within reach.

Light It Up struggles to find a successful strategy this season, dropping another game, this time in a blowout to the Cereal Killers. The Rookies have also struggled this season; however, they finally put it together a bit in last week’s win over White Magic. The play of point guard Chris Rosario will dictate the game for Light It Up, as he their only consistent scoring option.  On flip side, The Rookies will need to continue their solid defense, with their lack of a scoring punch.

Players to Watch: Chris Rosario (Light It Up), Jhamal Jones (The Rookies)

Ryan: Light It Up

Matt: Light It Up

In a battle of the winless vs the yet-to-lose, this game may be closer than the records of Lob 203 and the Cereal Killer may suggest. Lob 203 has had tough luck all season, culminating last week with a two-point loss to No Limit, while the Cereal Killers have been just the opposite, dominating their opponents, including blowing out Light It Up last week. Lob 203 will have to play strong defense against Mike Davis and company, especially keeping them out of transition. However, for the Cereal Killers, more of the same high scoring, transition offense could help them further their undefeated status.

Both these teams are coming off of impressive Week 4 wins; Sportslook dominated Goon Squad, while the Temptations had a come-from-behind victory over Red-emption. However, the talk of the league isn’t their wins, but it is Carmine Santorelli of the Temptations. Santorelli is coming off a league-record 62-point performance, so Sportslook will need to clamp down defensively, possibly face-guarding him, if they want to continue their winning momentum.

This game features two teams heading in different directions; the Renegades got their first win of the season, dominating the Avengers, while Stranger Danger suffered their second-straight loss in blowout fashion to The Firm. Look for the Renegades to go to Ty Reed early and often on the inside to capitalize on their size advantage. As for Stranger Danger, they will need Johnny O’Brien back ASAP to reignite their defense.

Run TMC found themselves on the losing end of a game for the first time this season last week against the Monstars.  Look for a lot of Will Hudson on the inside to get them back on track against a struggling White Magic squad. White Magic will need plenty of magic to win this game, specifically better shooting from Steven Buczek.

A battle of two teams heading in very different directions as of late; The Firm have won two in a row, while Goon Squad have dropped two in a row. One of last season’s top scorers, Matt Marconi, has been a non-factor for Goon Squad thus far. He will need to get back on track for them to get back in the win column. For The Firm, look for a steady diet of team defense and emotional play as they have shown all season long.