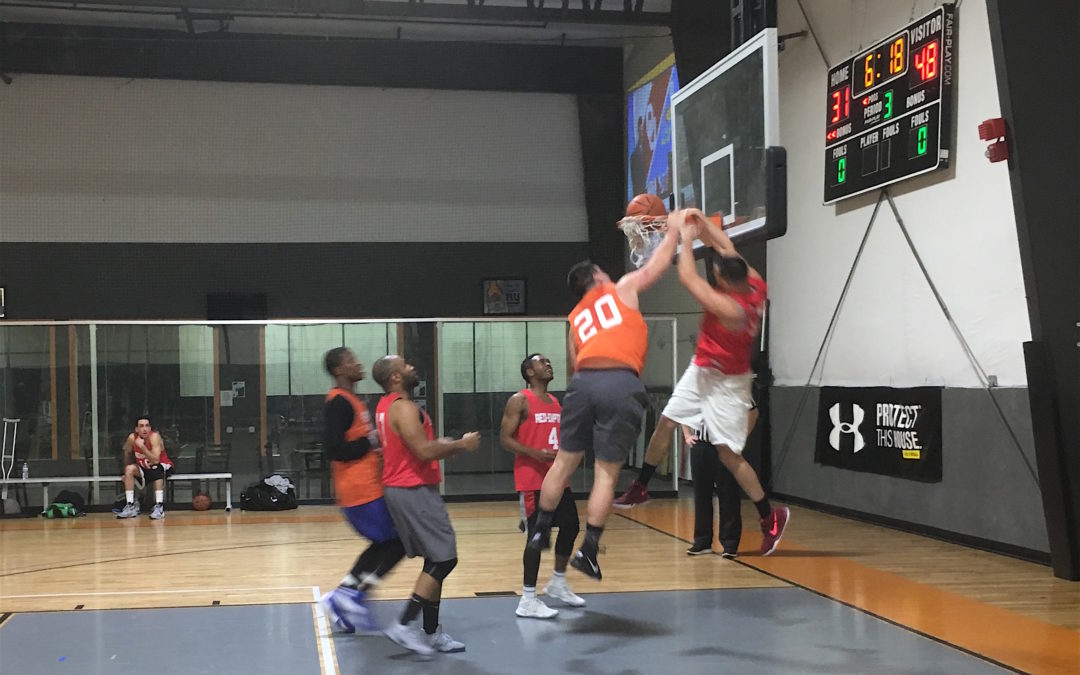 This week’s previews are presented by: Burns Tire

The Weekly Rebound Podcast, Season 2 Episode 7: Joe and Sam are back again recapping week six (:55), and giving their usual power rankings (21:00). Looking ahead to week seven, see who the two hosts picked to come out on top (31:10).

White Magic is coming off their first win of the season last week over Light it Up. Sportslook is looking to bounce back after being blown out by Redemption last week. White Magic is going to need to keep up their hot shooting if they want to win back to back weeks, and Sportslook is going to have to control the tempo from the opening tip if they want to get a win this week.

Top-ranked No Limit was pushed to the brink last week before prevailing over Run TMC in overtime. The Avengers suffered a disappointing 20-point loss to Stranger Danger. No Limit is going to have to score a lot in transition and stand firm on the defensive end in order to secure the win this week. The Avengers are going to need to shoot the ball lights out from start to finish if they want a chance at upsetting the no. 1 ranked team in the league.

The Cereal Killers are one of two unbeaten teams in the league, but the Firm are going to be one of their toughest matchups yet. Last week The Firm bested the Renegades and they are looking to carry that momentum over into week seven. Look for Mike Davis to do the heavy lifting and facilitate the offense for the Cereal Killers. For The Firm, Chris Martinez is going to have to have a big game if they want to be the first ones to hand the Cereal Killers a loss.

Both the Renegades and Rookies lost their games last week, so both teams will be looking for a strong bounce back performance. For the Renegades, Zeek Howard and Davin Sirpenski have to dominate the paint and out-rebound the Rookies in order to have a chance at victory. For the Rookies, they are going to need strong guard play and smart decision making. Turnovers are costly in this league, and neither team can afford to give the ball up.

Run TMC is coming off a very impressive effort in their overtime loss to top-ranked No Limit last week, while Stranger Danger is coming of a win as well. In Stranger Danger’s matchup, they jumped out in the first quarter to a 17-0 lead, and in TMC’s matchup, they had the lead in the final minute of regulation before losing in overtime. Safe to say both teams are feeling good about themselves and we should be in for a heck of a matchup Tuesday night.

Last week the Temptations were handed their first loss of the season by Goon Squad, while The Monstars narrowly escaped with a win against Lob 203. Temptation star, and Legacy Leagues leading-scorer Carmine Santorelli, was held to only eight points on 3-for-10 shooting from the field. He’s going to need to have a strong bounce back performance this week for the Temptations to get back on track. For the Monstars, they need to control their emotions and stay focused from start to finish to have a good chance at winning.

Lob 203 are coming off a difficult last-minute loss last week to the Monstars, and Goon Squad pulled out a big win against a previously undefeated Temptations team. Goon Squad’s defense held strong last week against the high-scoring offense of the Temptations, and they’ll need to continue that effort against Lob 203. Despite being winless, Lob has played arguably the hardest schedule in the league, and have been in many games until the end. Maybe this will be the week they’ll be able to put a one in the win column.