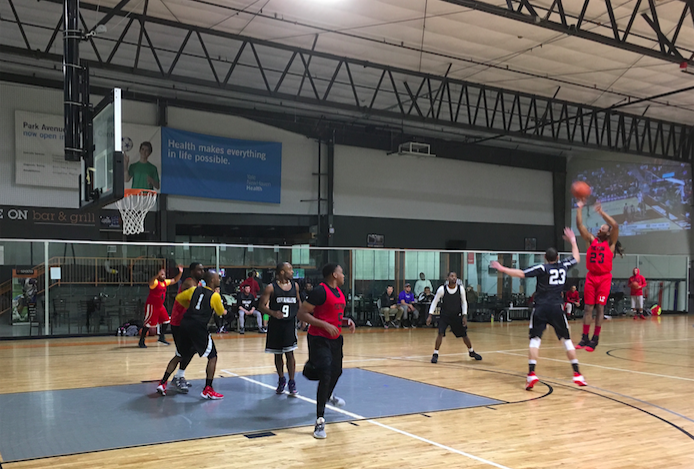 White Magic will be looking to make it three straight wins after coming from behind to defeat Sportslook last week. The Cereal Killers will be coming into this matchup as hungry as ever after getting a tough victory over The Firm. The Cereal Killers must lock in on the White Magic’s ‘Big 3 of Steve Buczeck, Justin Silva, and Mark Ballard, who combined for 47 of their team’s 56 points in their week 7 victory. White Magic will need to prevent Mike Davis from heating up from beyond the arc, as he is currently third in the league in three-point percentage.

Top-ranked No Limit nearly suffered its first loss of the season last week as they only they beat the Avengers by six points. As for Light It Up, they are trying to forget last week’s 37-point loss to Red-emption in week 7. If there was any good to take from the loss, Light It Up had some big-time performances by Jake Miko, who had a team-high 24 points, and Devin Luzietti, who finished the game with 19 points and 18 rebounds. Light It Up had 12 more rebounds than Red-emption, and will need to improve on their ball control and communication if they are to hang with a top-tier team in No Limit. Even if Tarell Vargas is gone again, No Limit has players like Howie Miller, Ronte Byrd, and John Rullan who can step up on any given night.

Players to Watch: Howie Miller (No Limit), Devin Luzietti (Light It Up)

The Monsters escaped with a seven-point victory over The Temptations in week 7, and seem to have really found an identity as a physical team that not only attacks the basket, but also will shoot at will. The Rookies too are gelling, and have found somewhat of an identity since Eric Singleton has stepping up. The Rookies had a late comeback against the Renegades last week, however, it was not enough as they couldn’t stop Ty Reed at the end of the day. Brandon Seabrook had a breakout performance last week with a team-high 28 points on 12-of-15 shooting. Antoin Pettway has been a huge boost for the Monstars who also have an array of scoring threats, so look for him to potentially breakout since The Rookies lack a true big man.

The Firm had a tough, hard fought loss last week to the Cereal Killers, and will be looking to regain some momentum as long as they can prevent the Avengers from connecting from downtown. The Avengers also had a close loss last week to No Limit, in a game where Zach Shapiro and Kevin Connors both had solid games from the outside. Shapiro and Connors are complemented well by Derrick Davis, who has been averaging 17 points since his week 4 debut.

The Firm will need to play an all-around solid game, with quality play from Markey DesRuisseaux and Chris Martinez, both of whom can jump out of the building. To ensure a win, players such as Larry Littles and Ty Drish will need to play more aggressively while keeping the Avengers from getting hot, as they are currently second in the league in total three pointers made.

Both Sportslook and Stranger Danger lost last week, and will be looking to bounce back to gain momentum as the regular season winds down. Sportslook had a disappointing loss to White Magic last week, but they were without Tyrell Holmes, Nick Bacarella and Steve Niggebrugge. If those three return, Stranger Danger will have a difficult time matching up.

Last week Stranger Danger couldn’t find an answer for Will Hudson and his Run TMC squad, so they will need a big game not only from Steve Echols, but also Joe Cordy, who finished with 17 points last week. This game is one of the more anticipated matchups of the week, and is expected to come down to who can finish in the late moments of the game.

The Renegades are coming off a solid victory over The Rookies in week 7, while the Temptations have now lost back-to-back games. When Ty Reed shows up, the Renegades are a very different team, with Reed averaging 24.5 points and 11 rebounds per game in his four appearances. Besides Reed, look for both Davin Sirpenski and Zeek Howard to have a solid performances in this matchup.

The Temptations will be as hungry as ever since falling in the power rankings following their losses to Goon Squad and the Monstars. Besides Carmine Santorelli, who we know can get hot from the tipoff, players like Fred Milford, who stepped up big last week, and sharpshooter Bryan Pratt will need to contribute in this matchup. It’s safe to say both of these teams need a win in week 8 as the playoffs are right around the corner.

Goon Squad fell victim to the previously winless Lob 203 last week in a disappointing effort, while Red-emption roasted Light It Up, making it three-straight wins. The two teams are at different ends of the spectrum: Goon Squad has been a very inconsistent team through seven weeks, while Red-emption has seen quality performances by each and every player on their team. Expect a physical game from not only Matt Marconi, but also Brandon Massaro and Justin Green. Marconi was held to 16 points last week, so look for him to continue attacking the basket while DJ Ellis will attempt to shut down Red-emption’s deadly scorer, Jalen Graham. Red-emption will also need players such as Christian Terrell and Mike Freeman to step up to fend off a talented Goon Squad team.

Run TMC’s two losses this season have come from No Limit and the Monstars, the top two teams in the league, so don’t underestimate them whatsoever in this matchup. Following a solid win against Stranger Danger last week, Run TMC is fighting for a top-seed come playoff time. Lob 203 finally felt the thrill of victory after last week’s 14-point win over Goon Squad. Paul Mirmina and Andrew Sampietro were crucial in the win, so they will need to play a well-rounded game against a tough Run TMC team to keep Lob in the game.

Will Hudson dominated Stranger Danger last week, while Matt Zocco and Kevin Blake have filled in around him on this powerhouse of a team. If Run TMC can shut down both Mirmina and Andrew Martino, Lob 203 will be in some serious trouble on the offensive end. Expect a hard-fought battle from both teams, as these teams have both beaten each other in prior seasons.