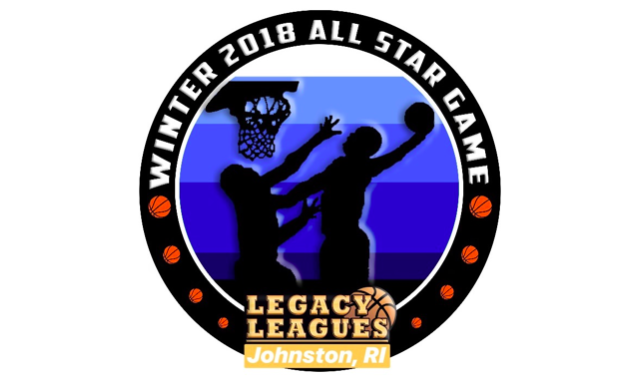 In the second ever Legacy Leagues Rhode Island All-Star Game, players will be hungry to perform to the best of their ability and put on a show that will not be forgotten. To begin both teams captains were chosen. The honor was given to Cody Crawford of Green Squad, and teammate Victor Kashouh Jr.

Crawford and Kashouh dominated opponents all season long, finishing with a league best 7-1 record on Green Squad. While Crawford was arguably the best offensive player all season, Kashouh controlled the game on both sides of the ball for them being that anchor for their squad.

With the captains in place, The Legacy Leagues hosted a live showing of the All-Star draft that took place on Wednesday, April 11, which can be found on our Facebook page. Kashouh was fortunate enough to win the coin toss and receive the first pick, and with that pick he chose guard Bryan Yarce from Prestige Worldwide, who is in the running for most valuable player this season. The rest of Team Kashouh and Team Crawford are as follows:

Right off the bat from looking at team Kashouh it is clear they are stacked with high flyers and solid shooters to round out his unit. They will be looking to stretch the floor as they are definitely the bigger team size-wise in this match-up, as Kashouh drafted two of the most dominant big men in the league in Brandon Sweeney and Joey Coro.

Bryan Yarce and Victor Kashouh will be a scary backcourt as they are both pure scorers and can play some of the best on-ball defense in the league. In addition, Team Kashouh will have forward Tezhan Massey who is another very athletic and talented player who averaged 13.5 points per game this season while shooting an amazing 57.3 percent from the field.

The final two picks for team Kashouh were forward Matt Scavitti of Average Joes and guard Gino Forte of the Werewolves. Scavitti is all about scoring and getting the ball into the basket, as he averaged just about 20 points per game this season. Forte is a streaky guard who can control the offense and hit the three ball when necessary for his team.

A different approach from Team Kashouh, Cody Crawford drafted a very guard-heavy team with defensive tendencies sprinkled in with players like Brian Heston and Shaine Patrick. With his first pick in the draft he selected guard Nate Stichell from Boom-Shakalaka who has proven he is a defense-first type of player averaging four steals a game on the season.

Brian Heston and Shaine Patrick will be the ones controlling the glass for Team Crawford as they both averaged double-digit rebounds on the season. Heston, a former Defensive Player of the Year, is an all-around star who can score from anywhere on the floor in any way possible. With his length and quick hands he will surely be very active throughout the whole game. Patrick was a force all season as well, averaging three blocks a game while also averaging a double-double for the season.

To round out Team Crawford, following his guard heavy strategy, Crawford selected Tyler Barbosa from the Swish Kabobs, Jared Hanson from the Halfway Crooks and Mike Bandieri from the Wild Hogs. Barbosa and Hanson are great facilitators and really know how to run the offense, both averaging double-digits in scoring for the season it is clear they are able to score the ball at will as well. With the addition of Bandieri, who is a great defensive and three point shooting point guard, they have plenty of guards who can run the offense for them even though they already have Crawford and Stichell on top of that.

Both of the captains definitely seemed to take opposite strategies when drafting their teams, and it was clear they based it off of their strengths and how they personally like to play the game. Kashouh will be an anchor for his team on both sides of the ball as he is a great leader, and will look to spread the floor with all of his high-flying teammates. Crawford will be the leading force for their offense as he finished the season as the leader in points per game, while players like Heston and Patrick will look to defend and eat up boards on the glass.

I can give my best attempt to predict how this game will turn out, but it is difficult to analyze how this game will really go because of how talented both teams are. I do know for sure though that this game will be a very entertaining performance by both teams filled with plenty of highlights. My prediction is that team Kashouh will defeat team Crawford 110-103 in a shootout.