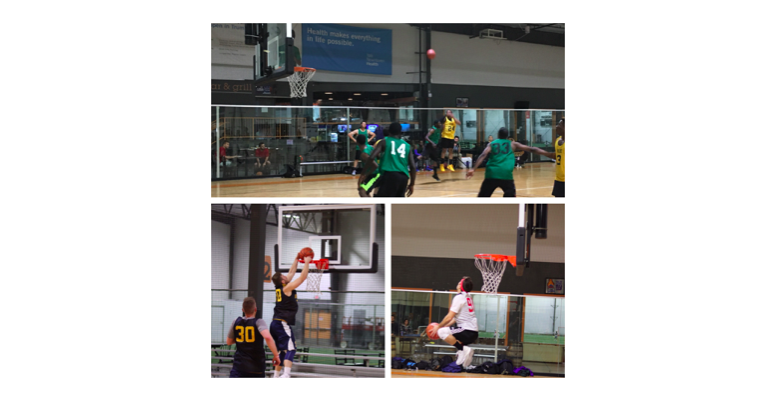 The Weekly Rebound Podcast (CT): Greg Horne and Connor Sauer break down the last week of Legacy Leagues action, and then talks to the Flint Tropics’ Ryan Caggiano in an interview you have to hear.

Stranger Danger pulled off a one-point win last week against Shooters Shoot, while No Limit more than doubled up Semi Pro in points in Week 4. No Limit is due for a loss, but their team is too stacked with talent for Stranger Danger to take them down.

The Monstars are coming off of three straight wins, including a crucial 77-71 victory over the Rim Breakers in Week 4. Shooters Shoot are still searching for their first win of the season, but I don’t expect it to come this week as they lack too much talent and athleticism for a hot Monstars squad.

The Flint Tropics are rolling and feeling good after three straight wins. Their only loss came in Week 1 in a tight matchup against the very skillful Rim Breakers, 67-66. Goon Squad has been having trouble pulling together some wins and closing out games, besides their less impressive win against a not-so-talented BS&B team. Expect The Flint Tropics to continue their streak and come out with a victory.

The Rim Breakers are coming off of their only loss against the Monstars in our Week 4 game of the week. The Temptations are without Carmine Santorelli, due to injury, but with him in the lineup they were able to knock off the Monstars in Week 1. I expect this game to be a close one, with the Rim Breakers making a bounce back in Week 5 to get the win against a high-potential Temptations squad.

Despite the loss of Joe Baccielo and three losses early in the season, The Throne is an underrated squad filled capable players. BS&B are winless and have yet to keep a game close in the first four weeks. I expect The Throne to gain some confidence after a win this week.

The Chasers only loss this season was in Week 3 to the high-flying Blue Devils. Semi Pro is looking like they could go the whole season without a win under their belt, therefore the Chasers should have no problem improving to 4-1 in Week 5.

Team Moose and the Blue Devils are both 3-1 and looking like serious playoff contenders. Both teams are coming off crucial victories in Week 4. I expect this matchup to be a close one, with the Blue Devils squeaking out a hard-fought win due to their up-tempo style of play.