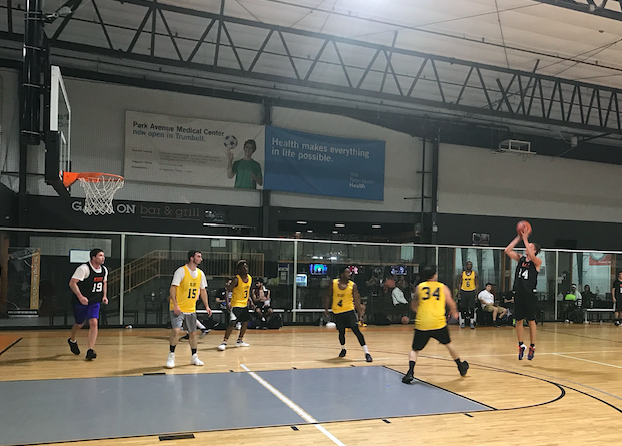 The Weekly Rebound Podcast (CT): Greg Horne and Connor Sauer break down Week 6, make their picks for all the Week 7 games and tell you who their “Surprise on the Rise” is for this week.

In a matchup between two teams in the lower half of the standings, this game will feature players trying to prove their worth in the league. Semi Pro continues to get blown out week in and week out and last week was no different against Goon Squad. Blood, Sweat and Beers pulled out a win against Shooters Shoot in what was a close game between two winless teams. This will be a game that will be up for grabs for these teams desperate for wins.

One of the best games on tap this week and big for playoff seeding, two powerhouse teams get a playoff tuneup in this week 7 matchup. The Chasers are fresh off a victory in a close contest against the Rim Breakers, while Flint had a 100-point blowout against Stranger Danger. Both teams have big men so they can grab boards extremely well as both The Chasers and Flint Tropics are in the top three in teaming rebounding across the league. In what should be a close and competitive matchup, look for this game to be within ten points or less.

Both The Throne and Temptations are better than what their record shows. The two teams are in every game, but are unable to finish out close games. This will be an interesting contest to see which team can pull out a close one. Both Jason Hernandez for The Throne and Carmine Santorelli for Temptations have been cornerstones this season for their respective teams and need to stay hot for either side to have a chance this week.

In a game that features both teams struggling to find any luck on both sides of the ball, Rim Breakers got off to a 3-0 start as a rookie team, but have now lost three in a row and are looking to make a push to go from an average to a top tier team. In what is a lost season for Shooters Shoot, it is all about pride at this point in the season for them. They’ve been in games, but are unable to get a victory through six weeks.

The Blue Devils have proven they are an elite team in the league this season. Come playoff time, they will be a force with their speed and points scored in transition. The defending back-to-back champion Monstars will have their hands full with another serious contender this week after losing to undefeated No Limit by 20 points in what was a much closer game than the score showed. Look for this to be a tight game with plenty of highlights and sharpshooting.

No Limit just can’t lose. They’ve taken down every team in their way and I don’t think it’ll be any different this week when they play Team Moose. In order to defeat No Limit, teams can’t turn the ball over and need to be lockdown on defense. Team Moose is good at both aspects of the game. I don’t think it’ll be enough to take down the Winter ’18 favorites this week as they will continue to roll through the competition.

These two teams have good weeks and bad weeks. They are both inconsistent on both sides of the ball. Goon Squad looked like the Goon Squad of old last week against Semi Pro, they were scoring at will. These teams look to get back on the winning track, but I believe Goon Squad will get the victory based on how well they played last week and how poorly Stranger Danger played in Week 6.