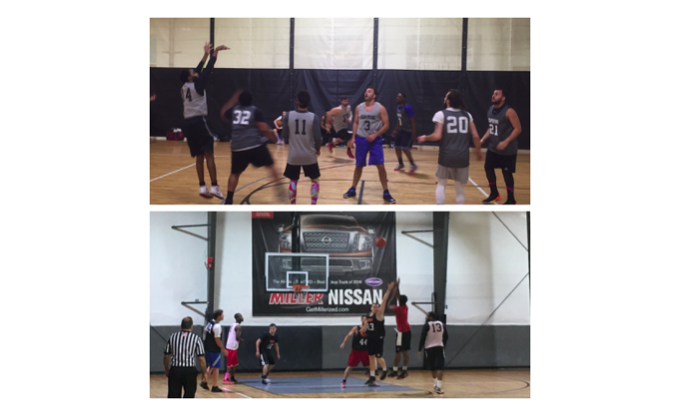 The Weekly Rebound Podcast (CT): Greg Horne and Connor Sauer break down Week 7, make their picks for all the Week 8 games and tell you who their “Surprise on the Rise” is for this week.

No Limit continued their win streak as they beat Team Moose, while the Flint Tropics lost a close one to The Chasers last week. In order to keep their hopes alive for a high playoff seed, the Flint Tropics will need to come ready to play this week. As long as Mike Bozzuto is playing well, so does the rest of the Flint team. However, in order to beat the only undefeated team in the league, they will need to play their best defensive game yet against a stacked No Limit offense.

Blood, Sweat & Beers went on a two-game winning streak these past two weeks, but that will all come to an end as they take on the Chasers this week. The Chasers just took down the Flint Tropics last week, even without Jerry Washington. This week should be an easy win for the gang in green as they take on a less talented team in BS&B.

The battle of the final two winless teams goes down this week. While both teams are stuggling to compete with most of the league, I think Shooters Shoot will finally get their first and probably only win of the season this week. They were able to keep their game last week against the Rim Breakers close for the first three quarters, playing way better than everyone thought they would. Semi Pro had the chance last week against BS&B, but couldn’t capitalize. I don’t think they will be able to this week either.

Both teams are coming off of a Week 7 win. Goon Squad played without Matt Marconi last week, but had DJ Ellis make his season debut. While they struggled to beat Stranger Danger in overtime, the Temptations had an easy win over The Throne. The Temptations are starting to get hot at just the right time and are looking to have their first back-to-back wins of the season.

Stranger Danger lost a close game in overtime to Goon Squad last week. While they want to win another game, this won’t be a favorable week to do so. With Mike Davis coming off a hot game last week against the Monstars, he should be able to repeat it again this week. Stranger Danger doesn’t currently have the tools to beat an elite team like the Blue Devils.

These are two teams with the same record, but play two completely different styles of basketball. Both team had heartbreaking losses last week. As we know, Team Moose plays lockdown defense and the Monstars have a very dominating offense. This should make for an interesting matchup, whichever team can take advantage of the weakest part of their game will come out with a victory this week.

The Throne have struggled immensely since losing their star player and are still trying to find their team chemistry. The Rim Breakers are also a team that have surprised everyone and not done as well as expected. With both teams having their own problems, it is The Throne that I believe will have a harder time trying to win this game.