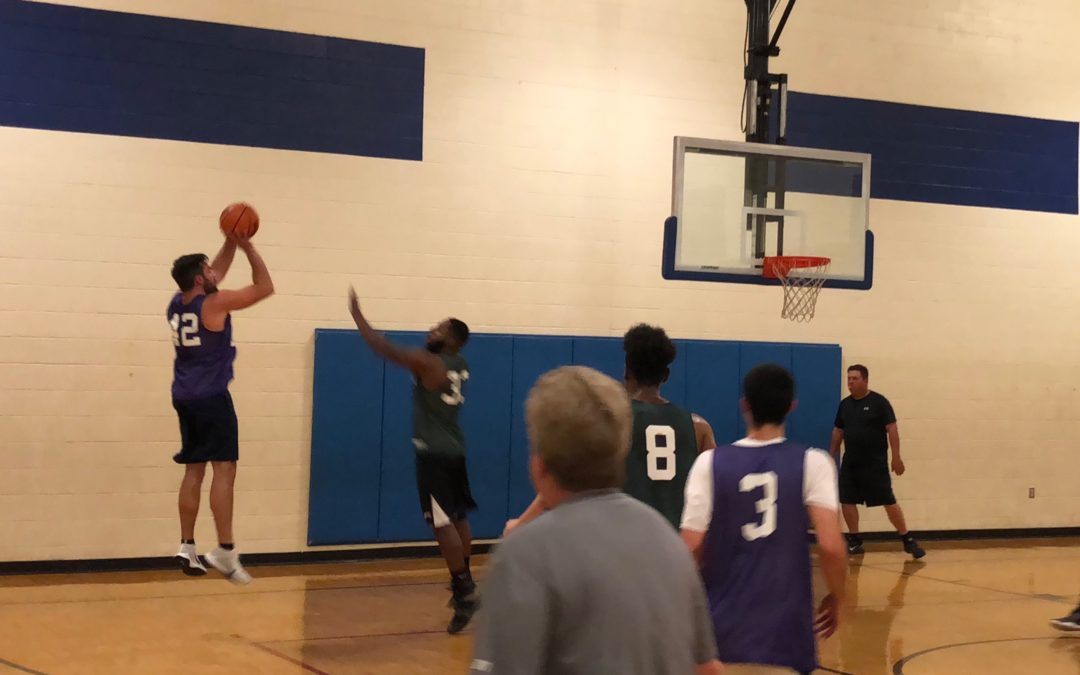 Boom-Shakalaka sits atop the power rankings again and have been playing very well, aside from their loss to Green Squad. Led by rookies Nate Stichell and Brandon Sweeney, their offense can score from anywhere in the half court. The two combined for 49 points in their last game, a win over the Werewolves. If the Swish Kabobs can’t control them, it could be a rough night.

As for the Swish Kabobs, they may be starting to feel a little pressure. Their last two games resulted in a comeback victory over the Halfway Crooks, winless at the time, and a loss to Prestige Worldwide. If they play the same way this week against Boom-Shakalaka, they could be looking at their second straight loss. That being said, Swish Kabobs still has a high powered offense and a defense that communicates well. If they bring their A-game this week, they could avenge their last loss and move up the rankings.

Both teams deserve their first win, but only one will be able to get it this week. The Wild Hogs have a great offensive duo in Joey Coro and Mike Bandieri. Coro can dunk on nearly anyone in the league, and Bandieri can shoot from anywhere in the half court if he heats up. The Wild Hogs have played very good games against good teams, losing to Prestige Worldwide by five and The Werewolves at the buzzer.

On the other side of the winless teams, the Average Joes have been improving. They played a close game against the Halfway Crooks this week and have a few people that can score the ball aside from Matt Scavitti. If the other shooters can get going and they can find an answer for Coro, they can put a number in the win column this week.

Prestige Worldwide is coming off of a few impressive victories, beating the Average Joes by 20 and the once undefeated Swish Kabobs by 14 in back-to-back games. Bryan Yarce continues to dominate the game both offensively and defensively. Mix that with some great shooters alongside him and dominant play in the paint from Shaine Patrick and Prestige Worldwide is a tough team to beat.

In order for the Werewolves to pull off the win, they need to start hot from behind the arc. They run their offense through the two-headed monster of Gino Forte and Brian Heston, who combined for 49 points their last time out. If they can both get going from deep, it would be extremely tough to stop for any team in the league to beat them. Heston is also a block machine, and if he can control the paint defensively the game could swing in the Werewolves favor.

Green Squad looks to continue their success against The Halfway Crooks this week. They lead the league in overall scoring, and every player in their starting lineup averages double-digit points per game. The two names to watch out for are Victor Kashouh Jr., who can score from anywhere he wants anyway he wants, and Cody Crawford, a deadly shooter who can put up points in bunches if he gets hot. Complimented by Greg Holt and Jordan Ferretti, Green Squad has an offense that not many in the league have an answer for.

The Halfway Crooks picked up their first win last game over the Average Joes. While Jared Hanson usually carries the scoring load, he got some help from Dylan Lincoln, who put up 19 and proved he can be dominant on the inside. If the two can get hot this week, Hanson from deep and Lincoln in the paint, it could be a lot for Green Squad to handle.