ZewCrew Limits Santorelli, Wake and Blake, to improve to 4-1 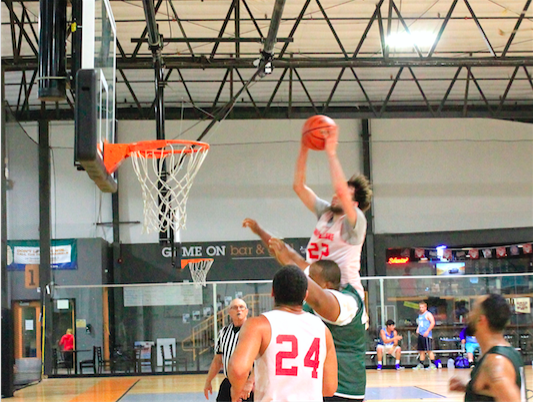 After coming up short last week in a physical battle against Sportslook, Zewcrew found its groove again against Wake and Blake, and re-solidified themselves as one of the best teams in the league in their 55-42 win. Harrison lead his team with 17 points, eight rebounds and three steals.

Harrison, one of the most gifted athletes on the team, used his supreme athleticism, and height to create a nightmare in the paint against the smaller Wake and Blake.

“Honestly we had to just double team Mark [Harrison],” Wake and Blake’s Keith Murphy said. “He’s a big guy, and he gets everything.”

“We had to guard him inside, and if we had contained him, then we could have contained the ball game,” Wake and Blake’s Steve Koripsky said.

Harrison’s aggressive play was something that placed a lot of the defensive attention on him, and opened the game up for his teammates to flourish. Chris Rosario, David Woolfork, and Ty Alston all scored in double figures because of the free-flowing ball movement.

Rosario, was the biggest contributor out that group, ending with 16 points, as he remained composed and directed his teammates where to go on the court, helping to put them in a position to score.

On the other hand, Wake & Blake’s star player, and key contributor for their team, Carmine Santorelli, did not play up to full strength in this contest because he was feeling a bit under the weather before the game. Santorelli ended with just five points and three steals.

Wake and Blake’s Adam Diaz tried his best to pick up the slack, finishing with 15 points, seven rebounds and two steals

However, one of the biggest flaws that attributed to Wake & Blake losing was the amount of turnovers they committed (10).

“It was our passing, our passing was a little off,” Murphy said. “We had to make better passes, because we turned it over too many times”.

Wake and Blake (2-3) will try to bounce back in Week 6 against The Land, who is coming off back-to-back wins of their own. ZewCrew (4-1) faces a decent test next week against Run TMC as they look to keep pace with Sportslook, who is now also 4-1 after losing in Week 5 to Blood, Sweat and Beers.